Published on: 12 March 2019 in Career Development

Directors UK Inspire: Mentoring on the set of Hollyoaks

As part of the Inspire partnership, Vicki shadowed Ian on the set of Hollyoaks — and you can read all about the experience below. 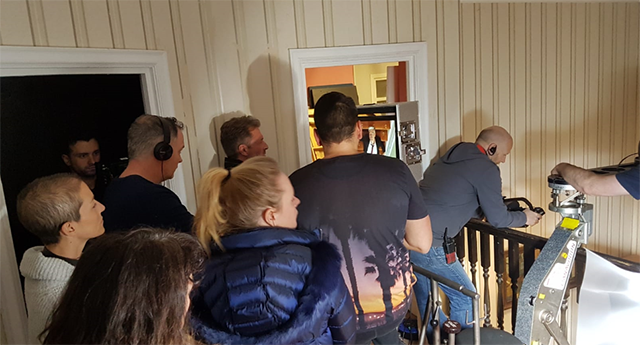 I am a writer/director and over the last two years I have been writing my first feature length screenplay while making in-roads into directing TV drama. In 2017 I was selected for the Directors UK shadowing scheme with Channel X. This is where I had the pleasure of meeting Ian Curtis and observing him direct on the teen comedy drama series So Awkward. I spent a week with Ian on set and was given the opportunity to direct and edit a few select scenes, which were broadcast last summer. Ian and I have kept in touch and at the end of last year he kindly offered to be my mentor. We realised it was an opportune moment to apply to the Inspire Scheme. Directors UK and the Inspire scheme have been a huge support, and in January this year Ian invited me to shadow him on Hollyoaks.

Day one of shadowing on Hollyoaks was incredibly exciting as one of the main characters was being killed off in a very gruesome manner. The scene contained a tense denouement between two of the series’ antagonists and culminated in a climactic, violent chase round the house. It was a challenging sequence, some of which was shot on a Ronin gimbal. There was also a huge rig at the top of the stairs to try and achieve a rising aerial shot of the character lying lifeless on the stairs. Hollyoaks is an ambitious, challenging environment as the show is shot predominantly on single camera. It is also pre-watershed, and what I’ve observed from watching it is that the confines of the timeslot produce more creative and inventive ways to tell the story. For example, if someone is physically hit during argument, you can’t see the contact of that punch. 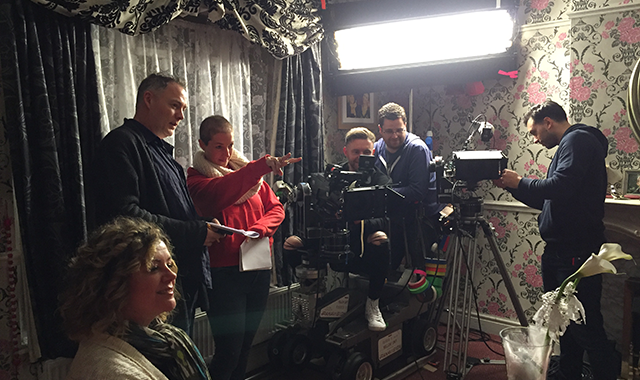 Day two was very different. Instead of high drama there was a comedic tone with visual gags and some carefully balanced emotional scenes. These were multi-handers in a house set. Here Ian and I reviewed his floor plans and discussed how to economize with the actor’s blocking. I observed how not only the camera moves within these tighter sets but what the actors blocking does to complement the cameras and add to the sense of movement and pace. This gave me lots of ideas of how I would block the scene and in many cases our plans matched which was very encouraging for someone who would love to direct the show!

As someone who’s ambition lies with directing drama, Hollyoaks sets a very high bar for new, emerging directors with a story to tell. I too am drawn to dealing with difficult subject matters and to raising awareness of the often-taboo subjects the show tackles. As someone who has cut my teeth on short films, Hollyoaks feels like a terrific home for directors who can demonstrate originality whilst serving the energy and look the show is famous for.

It’s been great to see Ian in action on a continuing drama dealing with adult themes, larger cast and increased time pressures and feel it is really helping me prepare to direct my first block of broadcast television drama. 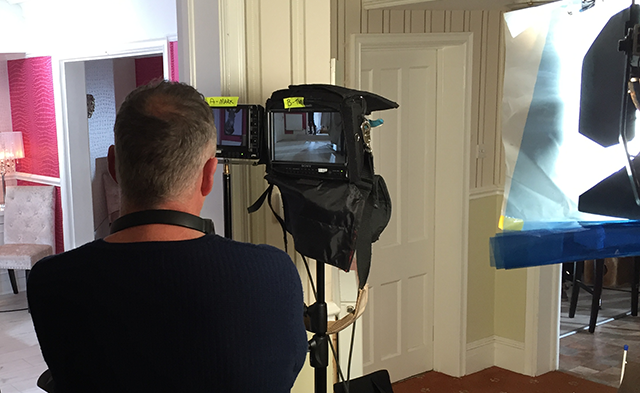 I met Vicki when she joined me on the shadowing scheme I ran with Channel X and Directors UK in 2017. Vick joined me for a week on the CBBC comedy drama So Awkward. Having read about the Inspire Scheme and knowing how passionate Vicki was to break into the sort of work I was directing, I offered to mentor her.

Looking back to when I started out I think there were people around that I could have gone to for advice, but without a formal role of a mentor existing , I didn’t seek out anyone in particular. So I wanted to offer Vicki my time and experience because I know I would have valued that relationship myself back then. My role I feel is to be that professional pal who can encourage, advise and dispel fears or myths about TV production and your role in it. If you go through the route of Runner, 3rd, 2nd and 1st AD to Director, you’d have built up a lot of experience on set observing other directors and understanding the relationships between yourself and other HODs. If like Vicki you’re a writer and short filmmaker without that same experience, stepping into the role of director on a television set can be a daunting prospect. If Vicki can join me on a show like Hollyoaks she’ll be able to ask any question that springs to mind, in that environment as I’m directing. It also gives Vicki the confidence to understand that this is a job she can do by observing how others do it. Hollyoaks have four shoots happening simultaneously, which means there are other directors to chat to as well. It’s a very friendly environment at Lime Pictures. An encouraging place for people starting out.

Vicki is a pleasure to have on set, gets the role and understands the requirements of a director. I believe she’s ready to get going in television have no doubt that she’s going to go on to great things. Moving forwards I’ll be here for Vicki until she’s up and running. I’m sure in ten years’ time she’ll be mentoring someone else needing a pal.